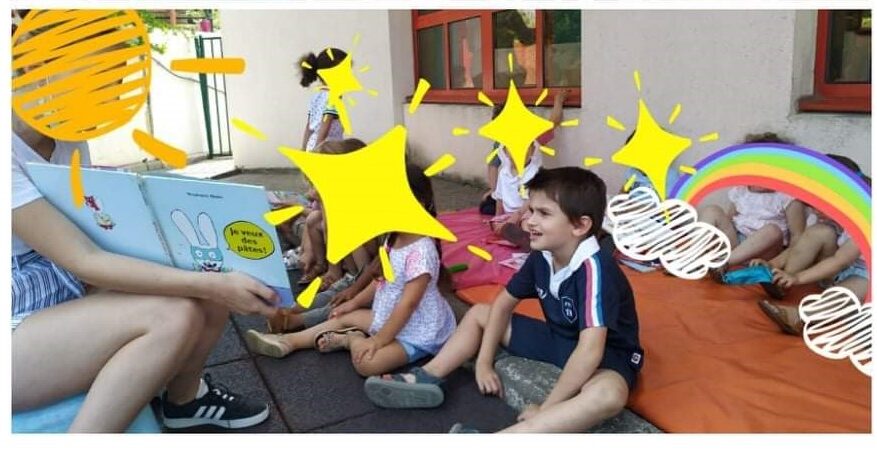 Cathy is the mum of Ilyes, a 5 years old boy, turning 6 soon, who has been diagnosed with autism when he was 23 months old. She accepted to answer our questions to raise awareness about Autism Spectrum Disorders (ASD). Before answering, she explained that there are different disorders and symptoms when it comes to autism (which is why it is called autism spectrum disorders): sensorial disorders, difficulties in communication and comprehension, repetitive behaviour, limited interest, deficiency. The only thing that is identical is how information is processed; one information at a time, with difficulties in filtering the details. She added that the choices regarding the structures that welcome children on the autism spectrum, and the process of inclusion in an ordinary social environment, are based on the specific characteristics of each child and that the journey cannot be the same for everyone.

How did you find out your son was on the autism spectrum? Did you know before he was diagnosed?

I learned about his ASD during the pre-diagnostic by the child psychiatrist, the diagnostic confirmed it. I knew before the diagnostic, my instinct was telling me that something was off, and Google put some words on his behaviour. But I was not sure, and like every research on Dr. Google, even if we only look for answers, we also end up with bigger doubts. So, I stopped looking for answers that were keeping me from the truth and leaving me in denial, when the people around me started having doubts. I was trying to protect myself and take a step back on what I had seen before everyone else. Therefore, I ignored what others were saying, and waited for the diagnosis.

Was autism spectrum disorder something you knew about or were you completely lost?

No, I did not know more about ASD than anyone else, which is what media show us: either the savant syndrome or a mental deficiency. I did not know there was something in between, the more common disorder. So yes, I was lost, I was scared about this ignorance, anxious about the future, and I was waiting for answers, lots of answers. But it is only when I realised that I did not need someone to tell me how to love my son, that I entered his wonderful world, and that he taught me how to see life as he does.

Was he taken in charge right after the diagnostic, if yes how? If no, did you have to seek help on your own?

Yes, Ilyes was taken in charge quickly, it was a matter of luck. Since he was diagnosed early, that a special education and home care service was opening for children on the autism spectrum (aged 2 to 4), and that our child psychiatrist was part of it, it was easy. But my reality is not the same as others; the reality is that there are awfully long waiting lists, few places for the high number of demands, whether it be in special education and home care service or in the medical-educational institute. Even regarding diagnostics, they can take a long time in certain regions, especially if the child is older, because early diagnostics have the priority. After Ilyes turned 4, he was on a waiting list for another special education and home care service, so I had to look for professionals working in the private sector. Here again, it was hard because not everyone is qualified for ASD, and those who are, are overbooked. I kept searching, and today I am surrounded by a nice team (a psychomotor therapist, a psychologist, a speech and language therapist, and a specialised educator).

What does a day look like with your son? Does he see professionals every day or do you have days when you can really spend time in the family? 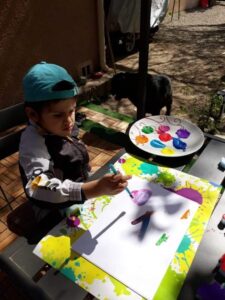 If the child is taken in charge, like my son, the schedule, and the way they are accompanied depend on their needs and abilities (limits, fatigue, etc.) and on the financial helps provided, but also on the schedules of the professionals. As far as Ilyes is concerned, it was based on his evolution and the availabilities of the different structures he goes to. It is easier to divide the time into weeks to make a schedule. In a week, Ilyes has: 15 hours of school, one day in a childcare centre, 2 hours with the speech and language therapist, 45 minutes with the psychomotor therapist, 3 hours with the specialised educator (outside or at home), and sometimes, depending on his needs, 45 minutes of swimming lessons, and, once every week, 45 minutes with the psychologist. During the vacation, he goes 2 or 3 days to a children’s activity centre instead of school. I have been struggling to make this schedule and to maintain it because if I do not, it might isolate us. Moreover, the more the child grows up, the more difficult it is to keep this kind of schedule; whether it be because he is evolving, so we are told that he does not need more financial helps to maintain this amount of care, or because he does not evolve and therefore, he is taken out of school. I find this illogical. The schedule is packed, but we spend time together mostly on Wednesdays and Sundays. Also, during school holidays, we usually take one week of vacation, and between 3 and 4 weeks during the summer holidays. These moments when we can rest and be together are particularly important to maintain. What is more difficult to maintain are the moments for myself.

How is Ilyes’s relationship with others? Has he been able to develop a social life with children his age or younger? 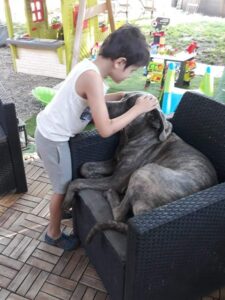 Social interaction is the biggest difficulty for people on the autism spectrum, mostly because of the lack of social codes (communication, detection of emotions, etc.). To this must be added their specific characteristics (sensorial disorders, abilities, etc.). However, the desire for interaction is present, but most of the time they are not understood, or we look at them as if they were weird. They just do not know how to reach out to others. Therefore, socialisation is one of the things we work on the most, notably through games and interactions, in order to cut the limited interests (every person on the autism spectrum has a limited interest, which is something they tend to focus the most on, for Ilyes it’s reading and writing). It requires a lot of energy to interact, mostly because the human face is full of expressions and information to process. Inclusion and professionals’ implication are important to develop this socialisation. So yes, Ilyes evolves in building relationships with other children, mostly because we work on it. The childcare centre he goes to has an important role in it, and he even has a girlfriend he interacts with. At school, he lets others approach him and touch him, which is also a big step, but a lot remains to be done because we are far from interactions between neurotypical children.

Would you say he is well welcomed and accepted in the different places he goes to (childcare centre, school, or during activities in the family)?

Being welcomed depends on people’s ability to make their lack of knowledge about ASD in evidence and to show that they want to help a child in their evolution. A lot of people think they accept the difference by not taking this difference into consideration, or, on the contrary, they take it too much into consideration. However, inclusion is all about adaption and adjustment in order to give the same rights to what and who is different. Today, Ilyes is welcomed well in general, I have nothing to complain about, but it has not always been the case, and it can become difficult again especially when changing school, children’s activity centre, etc. As for activities outside of family, it does not really matter for me anymore because I’m aware that a lot of people don’t know about ASD, so I just have to explain. When people are staring or acting inappropriately, I like to explain them with a touch of humour, and it works.

As a mum, do you feel accompanied enough or do you think some things could be improved?

It is hard to tell, I have always been used to handle things on my own and I don’t really feel the need of being accompanied. Also, I am surrounded by a good team of professionals who listen to me, share with me, and advise me. But on a bigger picture, yes, there is a lack of support despite the efforts made by a lot of autism resource centres, associations, etc. When you are concerned by ASD, you are in a mines field, everything can get complicated at any time. A lot of parents feel like they are alone, overwhelmed, and helpless, and it’s easy to fall into depression. However, the problem is not how we are accompanied, but the incompetence of our country in dealing with ASD. So, what must be done is to make this country more competent, bring support that would be similar for everyone, train professionals in a more general and affordable way, and open more places in the different structures.

Have you ever taken part in discussions, events to raise awareness on ASD?

Yes, it is part of my daily life, with testimonies, meeting with parents at the autism resource centre, in schools, and in a mall and its supermarket. I also took part in the autism day. There are many others, but some never came to a successful conclusion, because raising the awareness of people who are not open to it is sometimes difficult (regarding public transport, for example). But I do not waste my time anymore with the compassion of certain people, because most of the time it does not result in any action.

Do you feel like it is a sort of duty to talk about it because it can help your son be more included and understood? 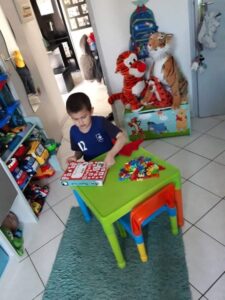 Yes, I think it is a duty, not only for him to be included and understood, but mostly to build a better future for him, make him evolve more easily, just like every person with ASD. My goal in everything I do is not only for Ilyes and his specific characteristics but for every form of ASD. I realised that being angry was not helpful. I met people who just ignored the situation and others who listened to me and decided to act with determination.

We are 40 years late when it comes to dealing with ASD, we wasted a lot of time in psychoanalysis, despite the proofs of neurosciences. We overburdened parents, taken their children away to place them in institutions, and even put them on neuroleptics. We just didn’t accept these brains made differently and put human beings in difficulty.

We made progress despite all of this, but it is important to realise we cannot catch up with all this lost time. We can learn lessons from mistakes made by others to go forward and evolve faster, and my involvement in this process of raising awareness has this goal. It is a duty necessary to build a better future for my son, and for every single person concerned by ASD.